I’ve known Peder Bäckman, international sales director for the German firm Audio Video Manufaktur GmbH (AVM), for many years, ever since he worked with Electrocompaniet. When I told him that I was looking for products to review in the reference system in my new 20′ by 16′ by 9′ music room, he invited me to browse AVM’s large catalog and see what tickled my fancy. In consultation with John Atkinson, it became clear that AVM’s largest, most powerful monoblock amplifier, the Ovation MA8.2 ($29,990/pair), seemed a good fit.

I admit, I felt uneasy about my impending audio blind date: Not only did I hope that the first amps I reviewed in my new system and room would be ones I loved, I didn’t want to spend months listening to and reviewing music with something that left me wishing it had been lost in transit.

As it turned out, the already-broken-in Ovation MA8.2s were lost in transit on their way to their previous destination, the CEDIA Expo. Caught empty-amped, AVM’s president, Udo Besser, stood in the company’s booth with nothing to play. After the Expo had closed and the missing MA8.2s magically reappeared, they were re-routed to my home in Port Townsend, Washington, and the review commenced.

Description
Via Skype, Udo Besser described the company’s Ovation MA8.2s as «classic A/AB amplifiers that, depending upon speaker impedance, output class-A up to 40Wpc.» For my 4 ohm Wilson Alexia loudspeakers, that meant that the first 16.6W (assuming Besser’s on-the-fly computations were correct) would be in pure class-A, the rest in class-AB.

The Ovation MA8.2 is a fully balanced, push-pull design that contains 24 N-channel and 24 P-channel MOSFETs, each device theoretically capable of outputting 18A max before self-destructing. Inside each monoblock are two heavy, 1000VA toroidal transformers, two smaller, 120VA transformers, and a fifth, standby transformer that powers the MA8.2’s standby circuitry. Transformers for the input and driver stages are kept as far from each other as the amp’s interior allows.

«It’s tricky to build a fully balanced amplifier based on MOSFETs, where the N and P parts are identical, and to get the two parts of the amplifier to work together without making it slower,» Besser told me. «We experimented a lot with the front end, where the sound is tuned, by giving it a completely separate power supply. In other words, the main amplifier stages in the middle of the unit have these huge power supplies, but the driver stage and input stage have a completely independent power supply.» 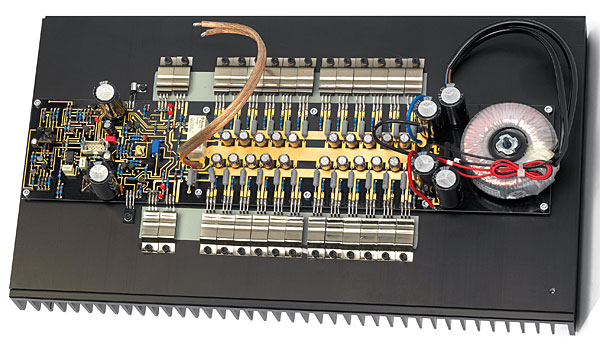 The MA8.2 uses 30dB of negative feedback. «We like the amplifier to accurately follow the signal, for which this feedback is necessary in solid-state designs,» Besser said. «This stops the amplifier from building its own sonic signature on top of the music. The amplifier . . . should not add anything, and [should] leave out as little as possible. ‘Neutrality’ describes best what we want to do.»

I certainly liked the fact that, for a 4 ohm load, at idle, each MA8.2 draws about 20W. That’s many hundreds of watts less—and much less heat—than my class-A Pass XA200.8s. In fact, while in winter I still have to use our heat pump’s air-conditioning in the music room with the Passes, for evening listening with the AVM Ovations I actually had to turn the heat on.

On the MA8.2’s front panel is a small display, and below that a row of five small buttons. The central button controls the menu. The other buttons control: the operating mode (Permanent, Remote, Trigger, Auto), which makes a difference with preamps; the power-output display mode; the display’s brightness (100%, 60%, 30%); and the speaker impedance setting (2, 4, or 8 ohms), which enables the MA8.2 to accurately display its power output. Once you’ve set the operating mode, you need set the rest only if you want to leave the display on and stare at ever-changing power-output numbers or a moving bar. Though I find such light shows distracting, I kept the display on during my critical listening, ignoring it for everything but fff passages heavy with brass and percussion.

In the faceplate’s lower left and right corners are two larger buttons, respectively for Power and Display. These light up blue when activated.

Do Not Try This at Home
With guarded anticipation, I opened the two sturdy, 107-lb shipping cases that held AVM’s big babies. That the amps themselves weigh «only» 92.6 lbs each—the Pass Labs XA200.8 monoblocks weigh 160 lbs apiece—was a relief. Once I’d switched the Sorbothane supports of my Grand Prix Monaco amp stands to ones made for a lighter load, connected the Ovations to my dCS Paganini-Rossini-Scarlatti front end and Wilson Audio Alexia speakers with Nordost Odin 2 interconnects and cables, and powered the AVMs with Nordost’s Odin 2 20-amp power cords, I discovered that I had nothing to worry about . . . almost.

Anyone evaluating an audio component must follow one cardinal rule: Add to the reference system no more than one audio product at a time. Simultaneously adding two or more products—even tweaks, which I consider vital accessories—introduces too many variables, and leaves the reviewer unable to ascertain which (if any) alterations in the sound can be attributed to which new component.

As much as I’d intended to stick by that rule, it proved impossible. First, power expert and blazing percussionist Garth Powell, of AudioQuest, visited my home in Port Townsend, Washington, and declared that there was far too much noise in the music room’s dedicated 8-gauge power line. His edict: «Call the utility company and have them check your transformer.» A subsequent visit by AudioQuest’s Kevin Wolff revealed that the circuit-breaker panel feeding the room lay at the bottom of our main breaker box, and was picking up noise from every noisemaker in the house (save our three rabid terrorers).